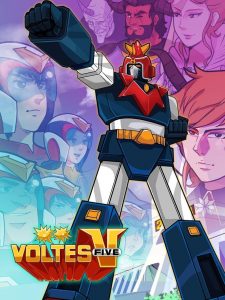 Voltes V narrates the heroic exploits of the young robot pilots known as The Voltes Team and their trials against alien invaders from the planet Boazan. Armed with the Super Electromagnetic Machine Voltes V, the five pilots drive back the invaders one Beast Fighter at a time. The series is different from typical super robot anime of the time in that it illustrates human sentimentality and common values, with underlying themes such as the love of family, equality, selfless sacrifice, team work, and patriotism.

Voltes V is a work that has a heavy revolutionary undertone. The series ends with Voltes V’s spectacular counterattack on planet Boazan to liberate the slaves from the oppression of a tyrannical ruler, Emperor Zu Zambojil. After Voltes V, Tadao Nagahama directed the TV anime version of Rose of Versailles, which leaves speculation that perhaps Voltes V was influenced by Nagahama’s research on the French Revolution for his future project.[original research?] The theme of enslaved population rising up to overthrow an aristocracy lend support to theory.

Voltes V’s arsenal consists of variety of missiles, a bazooka, beams, and weapons such as Chōdenji Top (Similar to the Chōdenji Yo-Yo of Combattler V) and Tenkūken (天空剣 Sky Sword, “Laser Sword” in the English dub, “Excalibur” in the Italian dub). With Tenkūken, Voltes V marks the enemy’s final moments with a signature “V” slash. This established it as one of the first super robots to use a sword in its finishing attack.